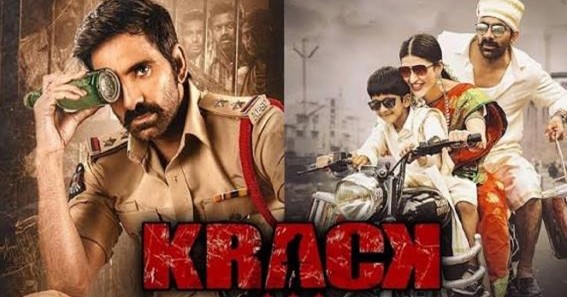 Krack stars Ravi Teja as a cop who plays by his own rules, and Shruti Haasan plays the female lead. Varalaxmi Sarathkumar and Samuthirakani are cast in key roles. The film accumulated a worldwide share of close to Rs 25 crore and reportedly breached the break-even mark despite the 50% occupancy. After its theatrical release, Krack was released on the OTT platform Aha on February 5. Now the Hindi dubbed film is coming to ZEE Cinema this June 2021.

Krack is the third collaboration of Ravi Teja and Malineni after Don Seenu and Balupu. The project also marks the second collaboration of Ravi Teja and Shruti Haasan after Balupu. In the film, which is tipped to be an action-thriller, Ravi Teja plays a cop. Krack has music by S Thaman, and also stars Samuthirakani, Ali, Devi Prasad, Chirag Jani, Varalaxmi Sarathkumar, Mouryani, Sudhakar and Vamsi Chaganti in pivotal roles. The makers have also roped in Apsara Rani of Dangerous fame for a special dance number in the film.

Besides, it is considered the 66th film of the lead actor Ravi Teja. Krack is the third collaboration of director Gopichand and Ravi Teja after Don Seenu in 2010 and Balupu released in 2013.

Recently, this Super hit Telugu Movie Hindi Version Television Premiered on Miniplex TV on 4th June Friday at 8.35am. Now its the time for ZEE Cinema to celebrate the Krack on small screens. The film will have premiers on 27 June at 8 PM, Zee Cinema. So, all the people who have missed the chance to enjoy the movie in theatres get ready for it on your Television screen.

To Know Some Great Stuff Do Visit squareroott

To Know Some Great Stuff Do Visit doesaz

To Know Some Great Stuff Do Visit knowcoz